Aylin Zoi Tinel was born in 1975, Istanbul. She entered the film industry as a director’s assistant. By the age of 19 she had gone on to run one of Turkey’s most commercially successful post-production studio, Autopsy. Following this, she edited and supervised post-production on the American Independent Film “Crude”, which went on to win the Los Angeles Film Festival and a Special Jury prize at the Seattle International Film Festival. Next Aylin found herself beckoned by the academic world, and was invited to teach and lecture at Bahcesehir University, Kadir Has University and Bilgi University. In 2005 she left teaching to co-found the Film Collective, Vav Film Group to develop, nurture and support film and documentary projects. In addition to countless commercials, Aylin has edited a variety of notable feature films, documentaries and art installations. Right now she continues her work at ‘Civil Editors’, an editors collective which she and her editor friends founded in 2012. 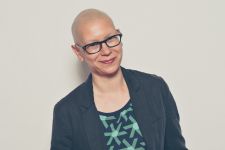